Worry beads may be constructed from any type of bead, although amber, amber resin (such as faturan), and coral are preferred, as they are thought to be more pleasant to handle than non-organic materials such as metal or minerals. Greek worry beads generally have an odd number of beads (often one more than a multiple of four, e.g. (4×4)+1, (5×4)+1, and so on, or a prime number, usually 17, 19 or 23) and usually have a head composed of a fixed bead (the so called “priest”), a shield to separate the two threads and help the beads flow freely, and a tassel (or founda in Greek). Usually the length of worry beads is approximately two palm widths. Hand made komboloi are the best to purchase in Greece and their prices can vary from a few euros to 1,000 euros and even more. 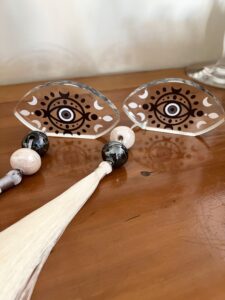